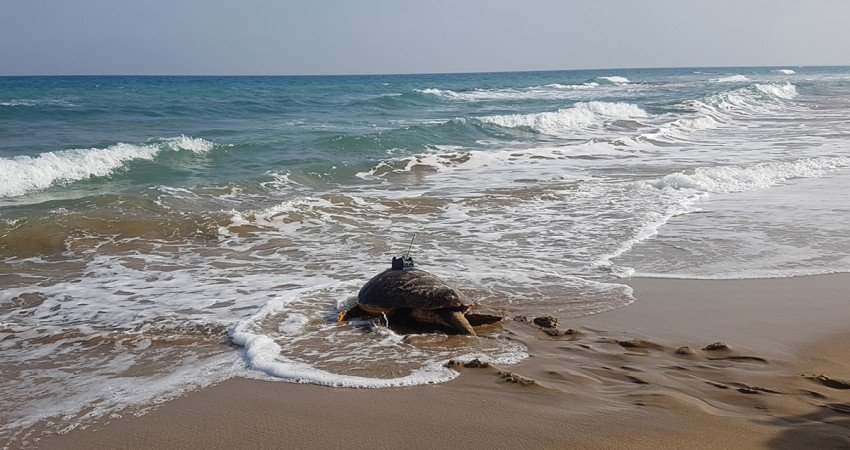 Thanks to satellite telemetry, scientists and conservationists are able to accurately track turtle movements through the oceans. While most sea turtles migrate between foraging and nesting grounds, in some cases seasonal migrations can cover the most incredible distances. Here is one such remarkable journey…

When a 43 kilogram male loggerhead turtle was accidentally caught in trawling nets off the Famagusta coast earlier this year, local fishermen freed him from their nets and contacted the Society for the Protection of Turtles.

Under a joint research and conservation project with Bird Life Cyprus, such by-catch turtles are named, health checked, vital statistics noted, and finally satellite trackers are carefully attached to their shells before they are returned to the security of the Mediterranean waters.

Thus ‘Pambos’ (pictured above) – as his rescuers named him – weighing a substantial 43 kilograms, with a shell length of 71 cm was released on 13 March. From the outset his movement pattern was very different from the 13 other by-catch turtles that are currently being monitored. While the other turtles mostly stayed within Famagusta Bay, with the occasional exploration further along the coast, Pambos was quickly heading further afield.

Pambos headed past the Ayia Napa peninsula and round to Larnaca Bay, along the south coast to Akrotiri Bay and beyond. He spent some weeks thoroughly exploring Episkopi Bay, and the coast from Pissouri to Paphos.

Having left Cypriot coastal waters, Pambos headed due west across miles of open sea between the Greek islands and north Africa.

And this is the astonishing journey to date… well over a thousand miles across the Mediterranean past Sicily to the coastal waters of Tunisia.

Below is the live satellite map showing the latest updates. Click on any turtle name on the right-hand side to see individual tracks. Or click ‘see all’ to show all the turtle tracks superimposed simultaneously.