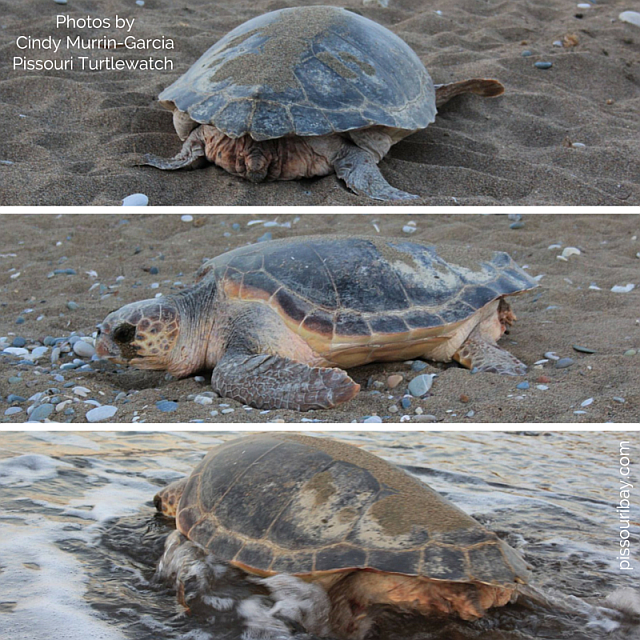 And don’t we all love the simple pleasures of spending time at the beach – watching the waves breaking, skimming stones, paddling at the water’s edge, studying pebbles and touching wave-smoothed glass.

If you’re lucky enough to visit at different times of the year, you can witness the changes of the seasons. Summer visitors watching the benign waves lapping would never imagine the drama and terrifying power of the crashing winter storms where the water can come right up to the path. In recent winters enormous chunks of concrete have been taken by huge breakers undermining the Columbia footpath and disintegrating the slipway.

Then suddenly last spring tonnes of sand arrived courtesy of that season’s more moderate waves, covering the pebbles and clothing the beach in another guise.

For me the most exciting thing about Pissouri beach, though, is the fact that it’s a turtle beach

Every year it plays host to endangered nesting Loggerhead sea turtles… with mature females returning via some amazing navigational sense to dig their nests on the same beach where they themselves hatched.

Until this season I had no idea how much of a labour this is. One of a dedicated band of volunteers from Pissouri Turtlewatch, Cindy Murrin-Garcia has been documenting events via social media. Her dawn beach patrols have followed and filmed quite a few turtle tracks up from the shoreline, showing that females habitually make repeated forays throughout the night before selecting a nesting site.

After establishing a successful lay, Pissouri Turtlewatch protect the site from predators with a cage and cordon. At this point the clock starts ticking. 45-51 days later the hatchlings will emerge – normally at night and in groups over a period of a few days.

Drawn to the sea by the reflections of the moon on the water, it is important not to confuse them with any other lights. Red torches are used by the trained volunteers on their overnight vigils, because turtles cannot see red light. Efforts are made to avoiding touching the tiny creatures during shepherding, as the purpose of this vulnerable trek across the beach is twofold; it has a part to play in the imprinting that enables females to return to this site at maturity, and it is nature’s way of building strength for survival in the water.

On rare occasions turtle events happen during daylight hours. Yesterday Cindy found a female turtle on the beach during her early morning patrol, allowing her to take these wonderful photos. And later in the day Pissouri Turtlewatch excavated a hatched nest to help the last few stragglers on their way.

Ungainly on land, once in their element, the tiny hatchlings make rapid progress away from the shore. A study involving gluing tiny satellite transmitters to baby Loggerheads found that in their first few hours they ‘sprint and ride’ the waves at an impressive 60 metres a minute in their efforts to escape coastal predators.

Surviving to adulthood is precarious: it is estimated that as few as one in a thousand make it. Those that do have a life expectancy of between 45 and 65 years.

Although turtles can regularly be seen swimming in the bay, our favourite way of turtle spotting is to take a two-hour sunset cruise from Paphos harbour with George on his vessel Atlantis. Equipped with a series of underwater portholes, this is a great way of getting up close to turtles, stingrays and the most amazing fish.